There are many common wasp species in the southwest desert. Generally, they can be divided into two groups; social wasps that live in large groups with a structured hierarchy of queens, workers and males, and solitary wasps that live and hunt alone. Some wasps are minor pollinators as they feed on pollen and nectar and others serve the environment as predators of many undesirable insect pests and spiders. All wasps retain their stingers and can sting multiple times. Social wasps can be particularly defensive around their nesting areas and can be dangerous to humans, pets and live stock. Below is a description of commonly encountered species in the desert and some not so commonly encountered that live in our higher elevations and sky islands.

Tarantula Hawks are a species of solitary wasps that hunt tarantula spiders for food for their larvae. Mature adult females are about 2” long and have blue black to solid black bodies and bright red or rust colored wings. The stinger of a female can be up to 1/3” long and they pack one of the most painful stings recorded for any insect species. Females persistently hunt for tarantulas and it is not uncommon to see them hover, re-visit and crawl through areas searching for them. They have the habit of constantly flitting their wings when rapidly crawling over the ground as if they are warning passersby of their presence. Males of the species do not hunt, but feed off of flowers of mesquite trees, soap berry trees and milk weeds. Males also have a tendency to stage themselves in high weeds or bushes for periods of time while looking for fertile females. Over the years we have had occasion to see accumulations of males and females gather on mulberry tree leaves in the spring. They fly in and out and briefly position themselves on the leaves as if this were part of a mating ritual or cycle. We have seen as many as thirty males and females do this at any one location and the behavior only lasts for three to five days. Tarantula Hawks are also known to feed on dropped, fermenting fruit and may occasionally be seen working through rotting citrus under trees in a garden. Although gregarious, persistent in searching ground areas and curious, Tarantula Hawks are relatively docile and usually will not sting unless thoroughly provoked.

The Organ Pipe Mud Dauber which is jet black and the Black and Yellow Mud Dauber are common throughout the Sonora desert area and are another species of solitary wasps. Mature nest building females can be 1” to 1 ¾” long and have very narrow waists and a long extended abdomen. They give the appearance of looking very sleek and ready for action. Because they commonly build their mud nests around houses; under eaves, inside laundry rooms, in stationary grills and on walls, many people fear them. The Organ Pipe Mud Dauber is known for building long, consecutively joined mud tubes while the Black and Yellow Mud Dauber builds a mud nest that looks about the size and shape of a lemon. They are tremendous predators of orb spiders, jumping spiders and black widow spiders, which they collect, paralyze and deposit with an egg in each nesting cell; sometimes as many as twenty spiders per cell. They can be alarming because of their proximity to areas that people occupy and because of their constant in and out activity during nest building. Mud daubers are relatively docile and seldom sting unless handled. If the mud nests are unsightly, they can easily be removed at night. The wasps are not resident at the nest and will only work on building the nest site during daylight hours. 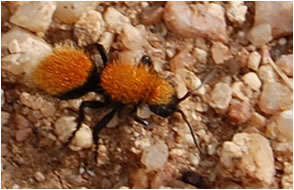 Velvet ants are a species of wasps that have wingless females that look somewhat like ants. However they are much larger and generally have bright red, yellow, silver or gold strips of velvet looking hair across their bodies contrasted with black coloration. They are solitary wasps and do not live in communities. Mature velvet ants feed on nectar, and are largely nocturnal although sometimes they may be seen roaming the ground several hours before dusk.

There are over 400 species currently recorded in the southwest desert. They are known for their extremely painful sting and the females will raid a bee or wasp ground nest, paralyze the inhabitant and lay their eggs on the carcass to feed the developing young. Velvet ants generally stick to undeveloped desert areas and are not aggressive. However, do not step on one.

There have had some reports over the years of yellow jacket colonies developed in our higher elevation areas and sky island recreational areas. Generally, these areas have proven to be over 4,000 feet in elevation or higher. To date we have had no reports of them being identified in the lower desert regions.

Yellow jackets are social wasps with distinct castes composed of larger fertile queens, workers, drones and new fertile queens. They can live in very large colonies with up to 4,000 and 5,000 workers and can develop nests with up to 10,000 to 15,000 cells by late summer. Colonies are annual with only newly fertilized queens hibernating and surviving the winter. There have been some reports that in lower elevation areas, yellow jacket colonies may be able to over–winter, but we have no evidence of it at this time. Typically, a yellow jacket is about the same size as a honey bee, about ½” in length, yellow and black and an aggressive forager. There are many stories about yellow jackets ruining a picnic by getting into soda cans, covering hot dogs and hamburgers and harassing people in recreational areas.

Yellow jackets are indiscriminate meat foragers and will harvest just about any meat source available, including dead animal carcasses, insects and your favorite picnic foods to feed their young. They also feed on nectars to support them and are considered minor plant pollinators. Yellow jackets are aggressive, colonize in large numbers and can be very defensive of their nesting area. Like Africanized honeybees, swatting at wasps can aggravate them and cause even more of the wasps to arrive and pursue you. 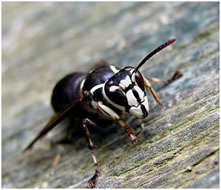 Bald faced hornets are not true hornets, but belong to the Yellow Jacket family. They are social wasps with a distinct caste system; queens, workers, drones and new fertilized queens. They are known for their large football shaped paper nests that can reach up to three feet in length that can house thousands of insects. Nests are usually abandoned in the winter and only the newly fertilized queens survive by hibernation. They are more robust than common yellow jackets and tend to have white faces and black bodies. Bald faced hornet nests are usually found hanging from trees. They are considered minor flower pollinators.

We have had only one unsubstantiated report of bald faced hornet activity on Mount Lemmon over the years, well over 5,000 feet in elevation. If you are hiking and see a large paper nest as described, avoid it. Bald faced hornets are very defensive of their nesting site, can sting multiple times and will pursue a perceived threat for long distances. 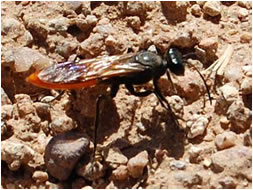 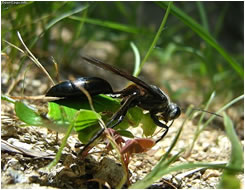