Each of the common bee species listed in this article is a native pollinator. In our years of service, we have had numerous inquiries about stinging insects other than Africanized honeybees. African bees are not native to Arizona. Any stinging insect species deserves our respect and careful consideration based on its purpose and relative value to the environment. They can become pests when nesting sites pose a potential danger to people, domestic pets or livestock, or cause damage to building structures or garden vegetation. Below is a description of the most commonly encountered species: 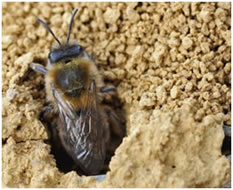 Digger bees, as the name implies, are ground bees that favor building their nesting sites in areas of exposed soil. These are solitary bees, but can live in large communities in the same area of exposed ground. Each nest site is a mud tube that leads to a waterproof nest embedded anywhere from 2” to 4” under the soil. Our species of digger bee is robust, jet black with clear wings that have a dusky, brown coloration at the tips. They are generally smaller than bumble bees and commonly mistaken for Carpenter bees. Digger bees are tremendous garden pollinators and pollinators for many native and non-native plant species in Arizona. A large ground infestation can be disconcerting, the bees are gregarious around their individual nesting sites, but are unlikely to sting unless seriously provoked. 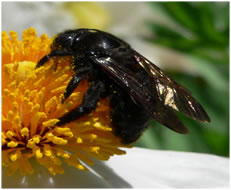 Carpenter bees are large, black, robust bees that establish their nests in dead, soft woods. They are about the same size as bumble bees, but are distinctively completely black with clear wings. They are commonly found in dead oleander, yucca stalks, wood piles, rotting tree trunks, and, unfortunately, untreated wood structures in residential houses. They make their nests by tunneling into wood. Each nest has a single entrance but can have many adjacent tunnels. Often, fresh sawdust is clearly visible piled up under an area of infestation. Carpenter bees are usually considered as solitary bees, but in our area are known to co-habit a nesting site and can cause consequent considerable structural damage over time if left untreated. Unlike bumble bees, the fertile females can over-winter, do not abandon their nests and will continue to thrive in an area of occupation. If you see large black bees slowly exploring the outside of your house, these are more than likely Carpenter bees.

Carpenter bees are another species of valuable long tongued pollinators. However, unlike bumble bees, they are not aggressive and have to be seriously aggravated to sting. Often, a female or non-stinging male will hover near the entrance of a nest site and challenge an intruder, but this is more a bluff than a threat. Many people fear them because; they are large, curious, and loud, stick around houses and are persistent in their explorations. Unless Carpenter bees are causing structural damage to your home, we advise leaving them alone, they are hard working pollinators, particularly attracted to deep throated blue and purple flowers. 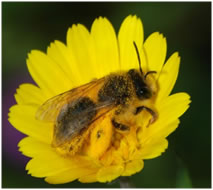 Andrenid bees, mining bees, are solitary ground bees that appear very much like a honeybee but are smaller, thinner and prefer building their nests in dry, open, sandy soil. They can live in large communities numbering up to the hundreds and in very large infestations, in the thousands. Each female bee develops a ground burrow about 2” to 3” under the soil with a main entrance and many branching side tunnels. There have been over 3,000 species of these short tongued pollinators noted worldwide and they tend to prefer warm temperate or arid climates. We have commonly heard them referred to as ground bees, rock bees, and boring bees.

Mining bees are often mistaken for Africanized honeybees, particularly in large infestations. We have seen clusters of very large groups of these bees in garden soil, foam roofs, in the soil around the exposed root bases of old trees, and, in one case, in the insulation of a mobile home with aluminum siding. They are prolific, but generally stay away from people and developed areas. Although any large infestation can be scary, mining bees are not considered dangerous and are good pollinators. Foam roof damage, however, can be a serious problem and may require control; their tunneling behavior can be destructive and allow water damage to roofing materials. 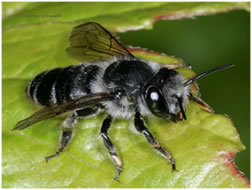 Leaf cutting bees are another common bee species that is often confused with Africanized honeybees. Adult bees are about the same size but have darker coloration. Typically, in our area, they tend to have light gray and black stripes across their abdomens. Leaf cutting bees are solitary bees that can nest in very small holes in wood siding, cracks or fissures in bricks or mortar joints, empty screw holes in patio furniture and even in drainage holes in door jambs.

Female leaf cutting bees are active nest builders in the early spring through mid summer. As they develop their nests, they make many trips to and from their nesting sites to gather pollen, nectar and nesting materials. They are alarming to most people because of their constant activity going in and out of the nesting site in areas around the home that are easily noticed. In large infestations, this can be particularly disconcerting and give the appearance of an active Africanized bee colony.

Leaf cutting bees are active short tongued garden pollinators and are not considered dangerous and do not aggressively defend their nesting site. However, they are persistent in trying to return to the site until their work is finished or the site is sealed. They derive their name from the fact that they cut round semi circular segments out of ornamental garden plants such as bougainvilleas, roses, redbuds and others for nesting materials. In large infestations, this can cause a garden to look unsightly, but does not seriously injure the plants.

** Some photos used on this page are from Wikipedia’s creative common’s licensed open source pictures.