A commonly encountered, stinging insect in Arizona is the Golden Paper Wasp, polistes fuscatus. They are common in North American and very plentiful in the Sonora Desert region. They will aggressively defend their nesting sites. Since a single wasp may sting multiple times and still retain its stinger, Paper Wasp infestations are considered potentially very dangerous to humans, livestock and pets.

Paper Wasp, polistes fuscatus, colonies develop through a predictable yearly cycle. It is a matriarchal society dominated by a fertile queen that lays eggs and establishes her position in the colony by aggressive behavior towards other wasps. Other fertile females, called daughters or sisters, are subordinate and determine their position in the hierarchy by aggressive behaviors. If the queen dies, the next most aggressive fertile female in line will take dominance and continue laying eggs. The fertile females, including the queen, take on the burden of initial nest building and foraging. They forage for flower nectar to feed themselves and the adults and for grubs and caterpillars to feed their young. 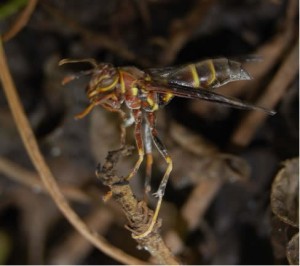 A typical Paper Wasp nest looks like a grey, conical waffle cone. The wasps make the cells by chewing wood and forming cellulose that hardens into a paper-like material. A nest can be the size of a quarter to the size of a dinner place. The number of wasps in a nest can range anywhere from 15 to well over 100. A family of wasps may also have multiple nests in a general location. The nests may be open and exposed or hidden in crevices and cavities. It is important to realize that in any specific location, you are dealing with a family of related wasps. In a large infestation, there will likely be more than one nesting site.
In the spring, after the initial nest is built by the new queen and her attendant sisters, daughter and worker wasps are incubated. Worker wasps are non-fertile females who protect the nesting site and take over the duties of expanding the nest and feeding the young. They are generally smaller and have noticeably darker wings. Worker wasps are responsible for most wasp attacks. They will respond aggressively and vigorously to any perceived threat in the vicinity of the nesting site. They guard the site and it is common to see them on the exterior of a hidden nesting area.

Male wasps are only produced in the fall at the end of the yearly wasp cycle. They fertilize new daughters who will hibernate in the winter to become queens or sisters in the spring when the weather warms. In most parts of North America, all but the fertilized new daughters die in the winter cold. However, in the Sonora Desert basin, we have found that in our mild winter climate, colonies may survive intact in protected areas. As a result, our desert southwest Paper Wasp colonies can grow to be unusually large in size and, consequently, be more dangerous and defensive of their nesting sites.